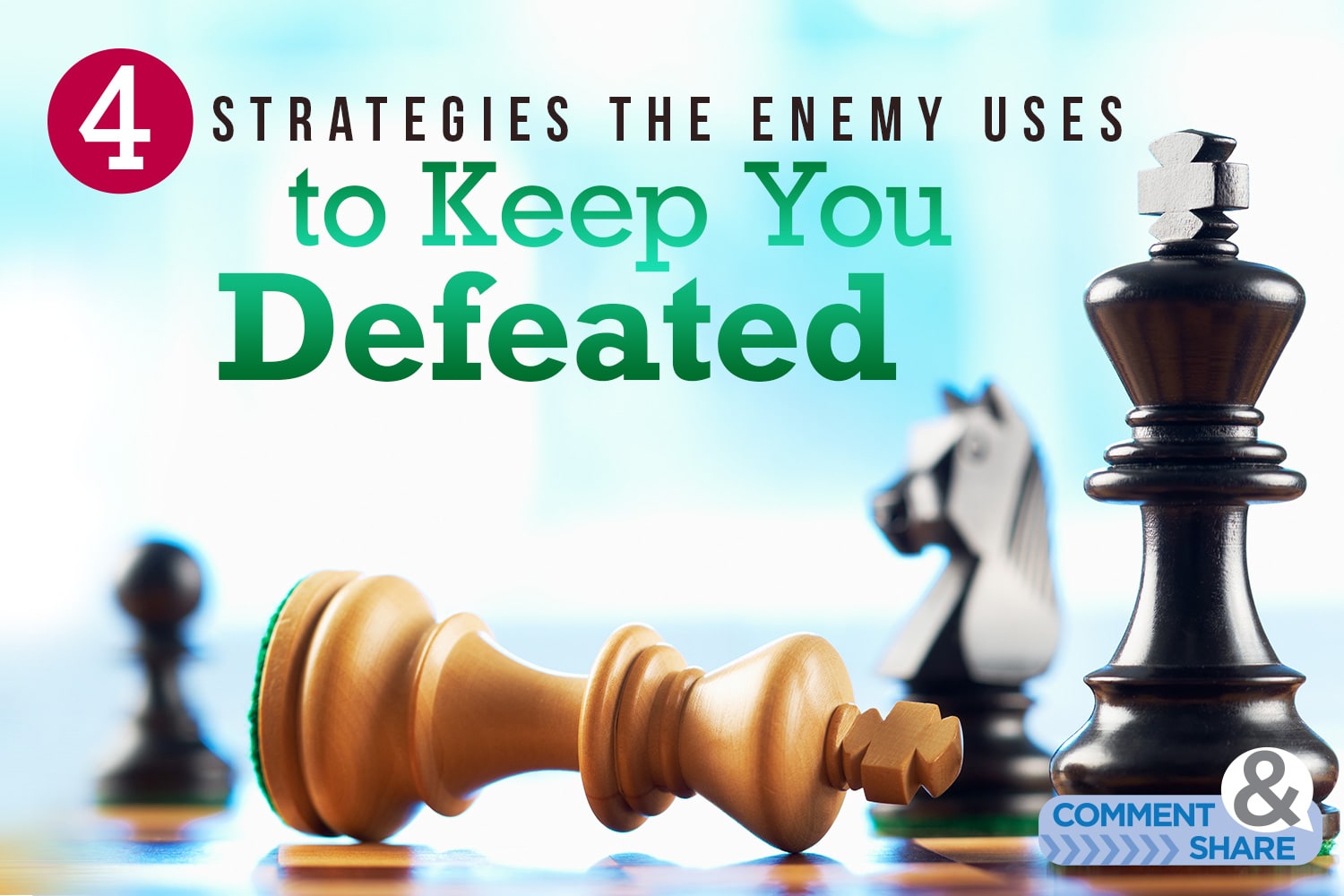 Do you have a battle plan to counterattack the strategies the enemy uses to keep you defeated? Don’t let the devil catch you off guard—you can defeat the enemy every time!

Do you have a battle plan to counterattack the strategies the enemy uses to keep you defeated? If you’ve ever served in the military, you know that no military unit would ever dream of going to war without a battle plan. What is a battle plan? It’s a strategy to exploit your enemies’ weaknesses and to maximize your strengths so you can win. If you’re not in the military, perhaps you’ve never thought you needed a battle plan—but you do because you have a spiritual enemy, Satan, who has waged war against you.

As Christians, we know Jesus has already defeated Satan for us (Colossians 2:15), but that doesn’t mean Satan isn’t going to use certain strategies to try and trick us into believing otherwise. His strategies are intended to keep us defeated and to take everything that is rightfully ours.

This is where some Christians are deceived. They say, “The enemy is already defeated,” then lie down and take a whipping. If we had no responsibility to stand our ground against the devil’s schemes, then God would not have told us to “resist the devil” (James 4:7) or to use “the weapons of our warfare” (2 Corinthians 10:4, KJV), and He would have had no need to give us “authority over all the power of the enemy” (Luke 10:19).

The Art of War is one of the oldest and most successful books on military strategy, having influenced military strategies for centuries. The author, Sun Tzu, says, “He who exercises no forethought but makes light of his opponents is sure to be captured by them.”

Forethought. Have we been thinking and planning ahead for the devil’s attacks? Or are we shocked and dismayed when he uses his strategies to try and steal, kill and destroy? Are we taking our role seriously, or are we making light of our opponent?

We need to have a battle plan, “so that Satan will not outsmart us” and we do this by becoming “familiar with his evil schemes” (2 Corinthians 2:11). It’s what the military calls intelligence.

God has given us all the intelligence we need to keep the devil under our feet. Psalm 144:1 says that He trains our hands for war. He reveals the enemy’s strategies, and then tells us the plan of counterattack.

Don’t let the devil catch you off guard. Be prepared! Below are four strategies the enemy uses to keep you defeated and how you can launch a counterattack—and win!

Strategy No. 1: The Enemy Instills Fear

Fear is Satan’s primary weapon. It’s a spiritual force that begins inside you, and it is totally destructive because it robs you of your faith and peace. It keeps your focus on circumstances instead of the promises in God’s Word.

That’s why the Bible commands 110 times to “fear not.” It’s why, when Jairus needed healing for his daughter and the circumstances didn’t look good, Jesus was quick to instruct him, “Don’t be afraid. Just have faith, and she will be healed” (Luke 8:50). Jesus was warning Jairus of the greatest enemy to his daughter’s healing—fear.

The enemy instills fear by challenging the promises of God. An excellent example of this is found in Matthew 14 when Jesus invited Peter to come to Him on the water. “But when he [Peter] saw the strong wind and waves, he was terrified and began to sink. ‘Save me, Lord!’ he shouted” (verse 30).

What enabled Peter to walk on the water? His faith in the Word of Jesus. What caused Peter to sink? He saw the strong wind and waves, and he was afraid. It wasn’t the wind and waves that defeated him; it was his fear of them!

Learn How to Pass the Fear Test here.

The Counterattack for Fear

Strategy No. 2: The Enemy Lies to You

One of the strategies of the enemy is to lie to you every day. Do you ever have negative and discouraging thoughts that come out of nowhere? Sometimes they can be hard to recognize as the enemy’s lies because they sound like they could be true. However, if you accept them as truth (or believe them even for a moment), you’ve fallen for his sly tactic, giving him the upper hand.

The enemy knows your insecurities, and he plays on them. He knows the fears you fight against, and he tries his best to feed them by telling you lies. Now, the question is: Why does he lie to you? What does he get out of it? The answer is this: access to your life. He has come “to steal and kill and destroy” (John 10:10), and if he can get you into wrong thinking, wrong believing, wrong saying and wrong acting, the door to your life is wide open to him.

So, if you have any thoughts that are opposite of what God says—thoughts like you aren’t going to be healed, delivered, saved, prosperous, full of joy, full of peace, full of hope or powerful in the kingdom of God—know they are outright lies straight from the pit of hell itself.

Learn How to Use Your Spiritual Authority in Any Situation here.

You can’t afford the “luxury” of entertaining the enemy’s lies. There’s too much at stake. Your health. Your family. Your relationships. Your money. Don’t let the devil become your counselor in the areas of life that matter most. He’s the father of lies and your greatest enemy.

The Counterattack for the Enemy’s Lies

Find out more about How to Respond to Satan’s Attacks here.

Strategy No. 3: The Enemy Tempts You to Sin

“Let no one say when he is tempted, ‘I am tempted by God’; for God cannot be tempted by evil, nor does He Himself tempt anyone.” –James 1:13 (NKJV)

God will never tempt you to do anything wrong. In fact, He has given you every tool to resist the devil so he will flee from you (James 4:7). The enemy tempts you to sin—and no one is exempt.

How does Satan tempt you?

Sometimes he’s obvious about it—tempting you to lie or commit acts of immorality or another sin clearly defined as such in God’s Word. But a lot of times, he’s subtler than that. For example, he may tempt you to think you are holier than others or that you’re doing others a favor or your “Christian duty” by judging and exposing people. You might even start thinking more about your own feelings, needs and desires than those of others.

That is how the devil tempted Jesus in the wilderness (Matthew 4:1-11). He pulled out all the stops to get Jesus to abandon the path of obedience and keep Him from what God had sent Him to accomplish.

When Jesus was in the wilderness, “after fasting forty days and forty nights, he was hungry. The tempter came to him and said, ‘If you are the Son of God, tell these stones to become bread’” (Matthew 4:2-3, NIV). Satan came to Jesus when he sensed weakness and tried to prey on that weakness. And…he’ll do the same to you.

The greatest danger in a believer’s life is to ever think that you are above temptation. That’s when you’ve let your guard down, taken off your armor, and assumed your work is done. But the truth is “that enemy of yours, the devil, roams around like a lion roaring [in fierce hunger], seeking someone to seize upon and devour” (1 Peter 5:8, AMPC).

The Counterattack for the Temptation to Sin

Strategy No. 4: The Enemy Stirs Up Pride

One of the most effective strategies the enemy uses to keep you defeated is to stir up pride. Satan fell because of pride, and he wants to take you down with him by getting you prideful. Don’t let yourself fall into it!

What is pride? Pride is defined as “an over-high opinion of one’s self; exaggerated self-esteem or conceit, haughtiness or arrogance; self-esteem arising from one’s accomplishments or possessions; an exaggerated idea of one’s own dignity or importance.” That’s just the dictionary definition, and it’s bad enough! But the Bible goes even further in its description of pride by identifying it as one of the seven things that God hates. Proverbs 6:16-17 calls it an abomination to Him (AMPC).

Satan knows pride is the path to destruction and shame (Proverbs 11:2, 18:12), so he will deploy tactics to get you prideful. He’ll start whispering all kinds of things you want to hear in hopes that you will become puffed up. He’ll say thing like, “You know, you’re much better than those other Christians. You have more ministry skills, and you live holier.” If you fall for this tactic, before you know it, you’ll be having an extra-high opinion of yourself. You’ll be walking in pride.

How many times do we see believers get into trouble because they get an overblown idea of themselves? They begin to think they’re so smart and have it all figured out. That’s a sure sign they’re listening to the devil’s whispering. Then, the next thing you know, they’re thinking they have to straighten everyone else out. Instead of just letting Jesus be Head of the Church, they feel like they have to step in and do the job.

Once that happens, it’s just a matter of time before conflict arises, and they fall flat on their faces in failure. Why? Because the Bible says God resists the proud (1 Peter 5:5).

Watch as Gloria Copeland and Billye Brim reveal Satan’s nature and character in this video:

The Counterattack for Pride

Are you ready to go to war against these four strategies the enemy uses to keep you defeated? Now, you know that the enemy instills fear, the enemy lies to you, the enemy tempts you to sin, and the enemy stirs up pride. Practice identifying his strategies every day, and use God’s battle plan to counterattack and win!

How to Respond When Satan Attacks