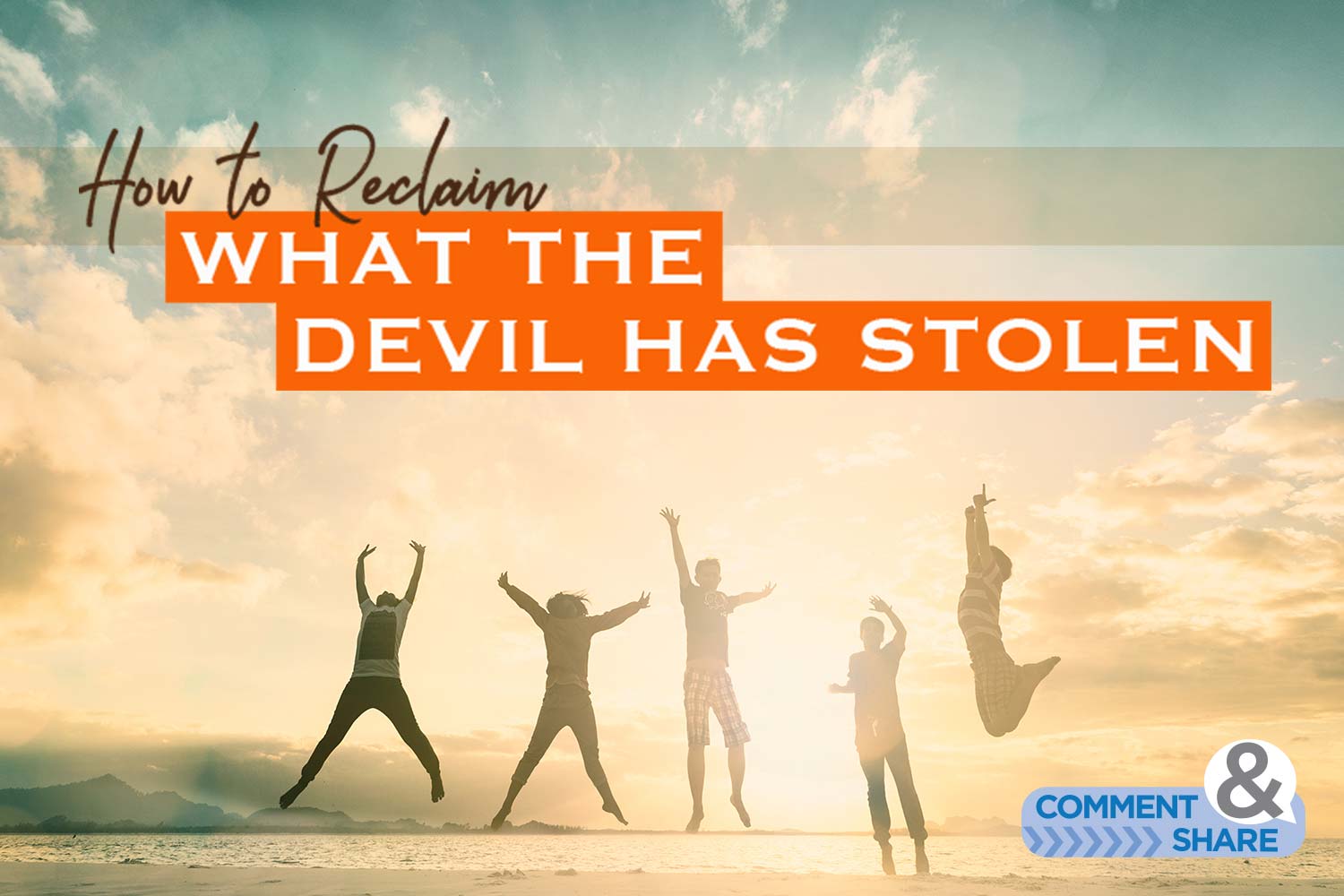 Yet, too many times, when Christians have suffered a loss, they retreat. They go into flight mode instead of fight mode. They’re so wrapped up in their circumstances, they aren’t prepared for battle. And as Billy Burke says, “You can’t defeat a 24/7 devil by being a part-time Christian.”

But God is a God of restoration. His will is for you to recover everything that has been stolen from you and live in VICTORY.

What has the devil stolen from you? Was it a relationship, your health, your finances, something physical? Do you want it back? God is ready for you to storm into the devil’s camp and reclaim what is rightfully yours. It’s time to get it back! Here, we’re sharing how to reclaim what the devil has stolen.

1. Encourage Yourself in the Lord

“And David was greatly distressed…but David encouraged himself in the LORD his God.” –1 Samuel 30:6 (KJV)

It had to have been one of the worst days of his life— and he’d had some whoppers in his time. But this…

David and his men had been away at battle when they returned home to Ziklag, only to find that their enemies, the Amalekites, had taken everything. Their wives, children and everyone else from their camp had been abducted. Oh, and to top it off—the Amalekites burned the whole place to the ground.

David and his men “wept until they could weep no more” (verse 4). Then it got worse. David’s men were so bitter about what had happened, they began talking about stoning him! This is when David became greatly distressed. David found himself at a crossroads.

Have you ever been at a crossroads like that?

Something bad has happened. Maybe not Ziklag bad, but enough to put you in great distress. Something that you don’t see a way out of.

Most of us have been there. But this crossroads of sorts is important. That’s because you’re choosing which direction to go and, ultimately, your final destination. Will you stay in the place of weeping, distress and mourning and accept what seems to be your new reality? Or will you stand up, fight and reclaim what the devil has stolen from you?

What we know is this—David recovered ALL. So, if we want to reclaim what the devil has stolen, we need to follow his example. And the first thing he did was encourage himself in the Lord. That’s not always the first thing that comes to mind, but it is the key to breakthrough.

How do you encourage yourself?

The answer is twofold.

First, with the Word of God. Pastor George Pearsons says, “You’ve got to keep going with The WORD until you win.” Dive into the Word and remind yourself of what He has said about you, the dominion He’s given you, and the promises He has made to you. It is impossible to spend good time in the Word and not walk away encouraged in the Lord.

Second, remind yourself of all the victories He’s given you. You may start slowly in remembering, but when you get going, those times He’s healed you, delivered you, favored you and defended you are going to come one after another until you’re shouting victory so loudly you’ll be ready to run after the devil and reclaim everything that’s been stolen from you.

That’s what Kenneth Copeland says he believes David did in that moment. He says, “I believe he had Goliath on his mind that day. I believe he said, ‘I’m going to win this one, too.’”

When things look bad—even impossible—don’t quit. Encourage yourself in the Lord. Then, get ready to move into battle.

“And He answered him, “Pursue, for you shall surely overtake them and without fail recover all.” –1 Samuel 30:8 (NKJV)

If you’ve ever been the recipient of a great pep talk, you know the feeling you get when it’s over. You’re ready to get out there and make it happen! It somehow gives you a surge of energy and enthusiasm that can’t be quenched by anything other than taking action.

That’s what happened to David when he encouraged himself in the Lord. He went to the Lord and asked, “Shall I pursue this troop? Shall I overtake them?” And God said, “Pursue…” (1 Samuel 30:7-8, NKJV).

For David, to pursue meant to gather his men, gather information about his enemies, then attack them until they were defeated.

What does pursuing look like in your situation? If the devil has stolen your health, your sleep and your peace, how can you begin to pursue? You begin by making a decision that you’re not going to camp out where you are and settle for his thievery. You’re not going to tolerate it any longer. Instead, you’re going to take up arms and go get your health back! Or your finances, relationship, opportunity or anything else he’s stolen.

Your weapons are the Word of God, the words of your mouth, and the knowledge of your authority over all the powers of darkness. It comes from a place of feeling power rise up on the inside of you, then determining to operate fully in that power.

Try these 7 Confessions To Take Back What the Devil Has Stolen HERE.

And you do the same thing for money, relationships or anything else that’s been stolen. Pursue it. Get on the move to taking it back. It belongs to you!

Watch Pastor George Pearsons teach you how to resist the devil.

“And they overcame him by the blood of the Lamb, and by the word of their testimony.” –Revelation 12:11 (KJV)

Here’s where it gets good. This is where you reclaim and take possession of what the devil has stolen from you. It’s game over for the devil, and he knows it.

When God told David to pursue, He followed it by saying this: “You shall surely overtake them and without fail recover all” (verse 8, NKJV). Guaranteed success! That word is for you today, too.

But as you move into the process of overtaking the enemy, remember this—it won’t be instant, and it’s going to take perseverance. “David attacked them from twilight until the evening of the next day” (1 Samuel 30:17, NKJV). That’s a long battle! And he was likely weary. But that’s part of THE BLESSING—not to never have to fight, but to have so much dominion over your enemy that when he comes against you one way, he’ll end up fleeing seven.

How do you overtake?

Faith, patience and WORDS. Keep believing and keep speaking, and you’ll take everything back. It may take time, but you will get it. Rebuke the devil in Jesus’ Name. Bind every spirit that is coming against your recovering all.

The best part? Not only did David recover all, but he took the spoils from the Amalekites, as well. If you think about it, that’s what happened with Job as well. He gained back everything the devil had stolen and then some—double, to be exact.

So, when you go to overtake and reclaim what the devil has stolen, don’t just go for what you lost. Expect MORE. After all, you are more than a conqueror.

Now that you know how to reclaim what the devil has stolen, tell the devil you’ve set your court date, and his time is up. Tell him you’re taking back everything he’s stolen. Jesus said if we catch the thief, he has to return it sevenfold. So, get in the business of bankrupting the devil. Take back all he’s stolen from you and then some. Glory to God!

Watch Kenneth Copeland teach you how to keep the devil out of your life!

7 Confessions To Take Back What the Devil Has Stolen