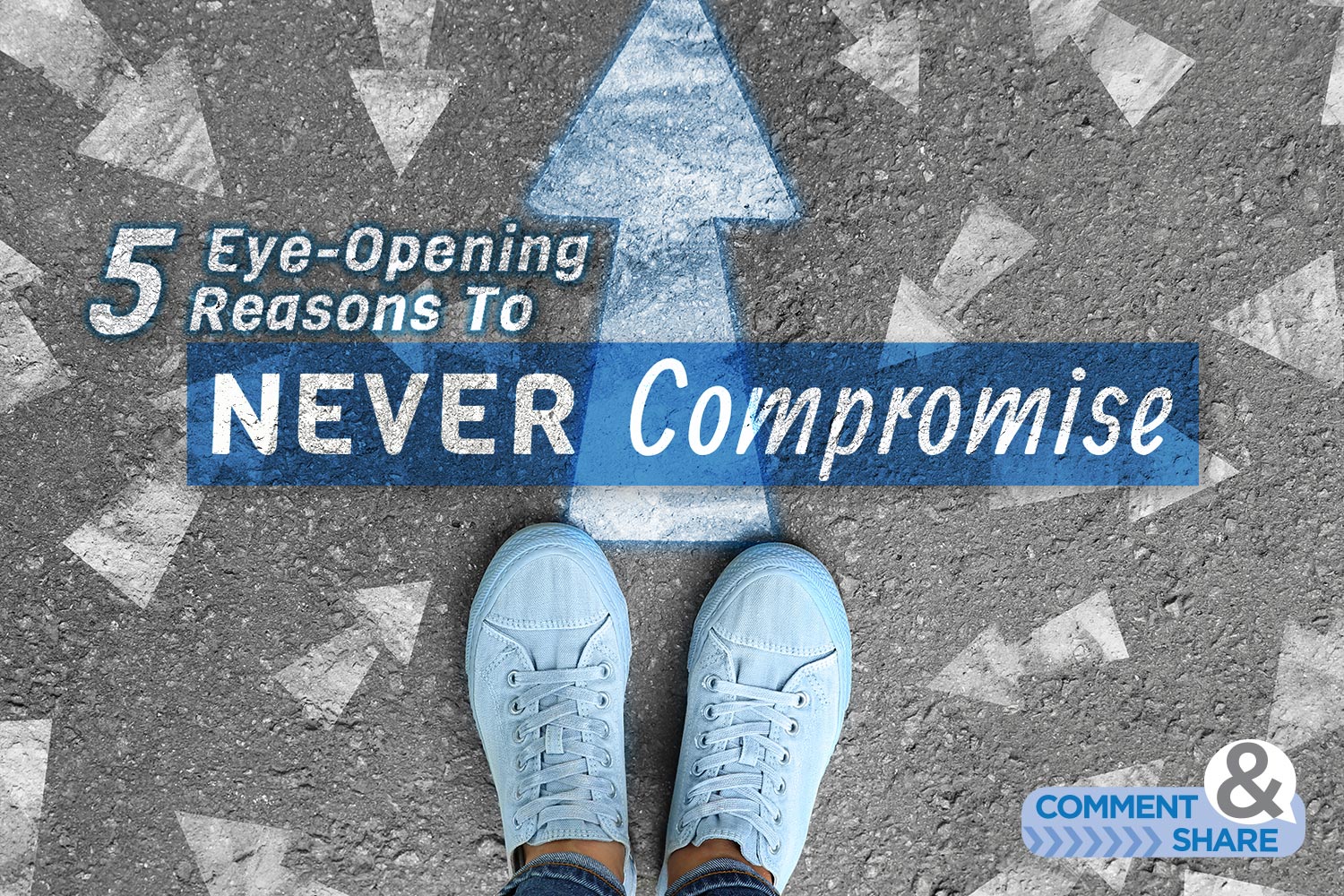 He was facing the threat of death.

The problem? This law would force him to compromise his beliefs—force him to stop praying. He wasn’t a man of compromise—so he didn’t. He kept praying, and not just to himself, but out loud with his windows open. And, yes, he was sentenced to death.

You may have already guessed that we’re talking about Daniel—a man who lived a no-compromise life, and saw power and blessing released as a result. Brother Copeland says, “The book of Daniel is 12 chapters of refusing to compromise.” It is also a book of great promotion and victory!

We can learn a lot from Daniel. Sadly, many Christians today have chosen to compromise in one area or another. Fear of rejection, criticism or missing out all give the devil just the opening he needs to steal, kill and destroy; but we can stop him in his tracks.

To compromise is to give in to another way of thinking—even just a little—that is different from what you really believe or what the Bible says. It could be telling a “white” lie, watching a movie that has sexual content or graphic violence, using coarse language because the people around you do, refusing to forgive someone, gossiping “just a little,” or anything else that is contrary to God’s Word.

Compromise may not seem like a big deal at the time, but the Bible teaches that its implications are far-reaching. The next time you’re tempted to compromise on what you know is right—even just a little—consider these 5 Eye-Opening Reasons To Never Compromise.

1. Compromise Will Cost You Promotion

Compromise—going just a little bit below what you know is right. The compromises that seem small are what the Bible calls the little foxes that spoil the vine (Song of Solomon 2:15). That’s why our faithfulness—especially in the little things—matters so much.

It’s how Daniel was promoted. He wouldn’t compromise, even when it seemed his promotion, reputation and even his life were on the line. If he would have, he would have shut the door on his promotion to becoming one of the most powerful men in Persia.

A person who won’t compromise is one God can trust with bigger and bigger promotions in life. And God isn’t the only one paying attention.

As you keep standing and refusing to compromise, you’re going to be promoted—in ministry, business, schoo, and your career. That’s why Kenneth Copeland says, “When someone finds out that you’re a person who won’t compromise, you become valuable in their eyes.”

Wondering if you’re compromising? See these 4 Common Ways Christians Compromise With the World.

2. Compromise Will Cost You THE BLESSING

Obedience is a big deal to God—not just because it shows honor to Him, which would be enough, but also because it keeps the devil out of our affairs. The world is always trying to diminish the severity of sin. Terms like “a little white lie” or the idea that “it’s just a movie” or “he had it coming” all seek to justify going against the Word of God—and for a believer, that means compromising.

The problem with that “little white lie,” or holding a grudge because someone deserves it, or anything else is this—it swings the door open to the devil. It gives him access to your finances, your health, your family, your peace, your joy and everything else that’s good in your life. In other words, compromise will cost you THE BLESSING.

Of compromising, Gloria Copeland says, “When we compromise doing what we know is right, it shuts off THE BLESSING of God in our lives.”

Next time you’re tempted to join in on some gossip, complain about what you don’t have, or unleash your anger on someone, ask yourself this—Is it really worth it?

Watch Gloria Copeland teach you how to develop a strong spirit.

3. Compromise Will Cost You Protection

Compromise isn’t something that seems dangerous in the moment, but if you know the Bible, you know it can be downright life-threatening. We need strong faith to resist the devil and overcome his attacks against us. But you’re not ever going to have strong faith if you’re compromising, because you’re stopping short of putting your full faith in God.

One of the greatest areas of compromise in the lives of Christian is found in the words they speak. God told Joshua not to let the book of the law depart from his mouth, but to meditate on it day and night. The Word of God should not be far from your thinking at any time. If an emergency arises, Scripture should be the first thing that comes out of your mouth (Proverbs 4:20-27).

Instead, most believers just let fly whatever they think of first, which is most often negative and cursing—speaking evil expectations over their own lives. That’s how compromise will cost you protection.

Don’t ever allow fear to make you compromise your confession of faith. What you compromise to keep, you lose. Stand firm and keep talking faith, and you’ll defeat any attack.

4. Compromise Will Ruin Your Witness

“Whoever wishes to be a friend of the world makes himself an enemy of God.” –James 4:4 (ESV)

Perhaps the most eye-opening of all the reasons to never compromise is the fact that compromise will ruin your witness to a lost and dying world. Our salvation, our knowledge of the truth, and our blessed position as the children of the Most High God come with a great responsibility.

That’s why compromise is about more than just you. It’s about the unsaved around you. In short, compromise will ruin your witness. If you’re gossiping, cussing, holding grudges, or speaking sickness and poverty, how are you any different from those around you? What victory do you have in your life that they don’t?

On the contrary, when we can walk in love toward those who mistreat us, keep our peace and joy if we’re laid off, and are known for speaking kind and encouraging words—now that’s something that will draw even the hardest heart toward Jesus.

5. Compromise Will Get Your Tail Feathers Burned

“The fire had not touched them. Not a hair on their heads was singed, and their clothing was not scorched. They didn’t even smell of smoke!” –Daniel 3:27

Now, this one is certainly eye-popping! No one wants their tail feathers burned.

You know the story…Daniel just left his windows open and prayed to God as he always did, refusing to compromise at the risk of his own life. His companions, Shadrach, Meshach and Abednego, wouldn’t compromise, either. They ended up in a fiery furnace as a result. But because they didn’t bow, they also didn’t burn. That’s a truth to live by. If you won’t bow, you won’t burn. As Gloria Copeland says, “Compromise will get your tail feathers burned. Don’t compromise.” That’s certainly an eye-opening reason to never compromise!

Make your goal to always please God before you please man. He has wonderful plans for your good, and if you’ll walk with Him, He will see you through. He’ll bring those good plans to pass.

How can you keep from being singed by life circumstances and the world around you? By believing God, being faithful, being loyal. By laying down your life before you compromise on the Word of God. That’s when fire can’t even touch you. The Bible says when Shadrach, Meshach and Abednego came out of that furnace, they didn’t even smell like smoke!

When you put faith in the Word, you can go through trials and not even smell like smoke or show a single sign of having been through anything. Hallelujah!

With these five reasons to never compromise, you have some strong reminders about how much those little decisions you make every day affect your life. If you want to live a life full of financial success, health, strength, love, joy, peace and every other good thing, always remember—you’re called to contend, not compromise.

Watch Kenneth Copeland as he teaches more about the power of living a no-compromise life.