How To Respond to a Betrayal - Kenneth Copeland Ministries Blog 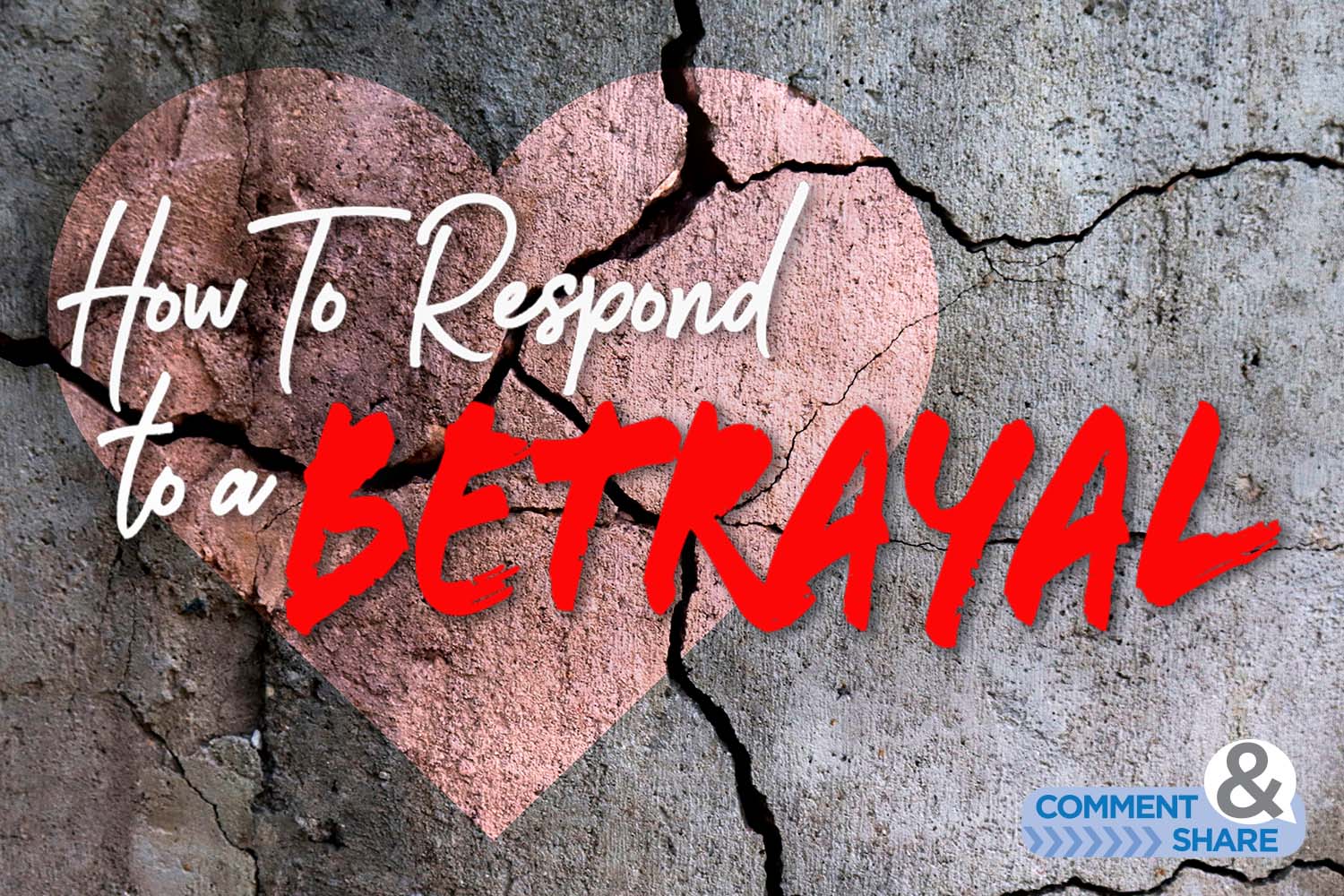 You were passed over for a promotion by an employer who promised it. A friend shared private information about you with others. A spouse was unfaithful.

A betrayal is the violation of a person’s trust or confidence. And it stings—to say the least. Jesus knew a thing or two about betrayals, and so did David, Samson and Joseph. (For a more detailed look, see Responses to 3 Bible Betrayals ) Your name, like most others, is likely on the list of those who’ve known betrayal, too.

But here’s something most Christians don’t know. Betrayal is a test. And it’s one that often comes just before a promotion, as we see in so many examples throughout the Bible. It is not the betrayal itself, as God does not cause betrayals, but how we respond to them that becomes a stepping stone to greater victories in your life.

If you’ve suffered a betrayal recently, or want to be prepared should one come, here is how to respond to a betrayal in a way that will expedite you to victory.

“The devil prowls around…looking for someone to devour.”—1 Peter 5:8, NIV

What makes a betrayal so painful is that it is almost always unexpected. But not to the devil. He knew it was coming and most likely orchestrated it behind the scenes, taking someone else captive to do his will (see 2 Timothy 2:26).

Now, he’s lying in wait for your reaction, hoping to get you to turn your sights away from him and onto the offending party. He’s waiting for that one moment when you step off the line of obedience to God’s Word, so he can move in. He’s waiting for you to take revenge, speak wrong words, and give up on a dream God put in your heart.

That’s why it’s so critical that in the midst of the pain and disappointment—which quite often runs deeper than you knew it could—you have to resist the devil. Resist the temptation to lash out, resist the desire to defend yourself or demand that the other person admit their fault. Resist, resist and then…resist some more.

Remember, you’re not the only person (not even by a longshot) who has gone through a betrayal. For Judas to walk with Jesus side by side for three years and then betray Him—the Son of God—is incomprehensible. For Joseph’s own brothers to not only consider murdering him, but then selling him into slavery is beyond all decency.

They, too, felt the sting. And they, too, had an opportunity to resist the devil, and instead chose promotion and ultimately, victory.

2. Get Rid of All Bitterness

The secular world of psychology has identified what they believe to be the five stages of grief. A betrayal is a loss—often a deep one—and can involve a period of grieving. The five stages include shock or denial, anger, depression, bargaining, and acceptance. You have likely felt one or more of these emotions after a betrayal. Feeling sad, disappointed or even angry after a betrayal is normal.

Just like the grief of losing a loved one, we have to guard against prolonged grieving because grief and sorrow are dangerous. That’s why Jesus bore our griefs and carried our sorrows on the cross (see Isaiah 53:4). The words griefs and sorrows in Isaiah can also be translated sickness, weakness and pain. But any way you translate them, they’re all pieces of the same destructive puzzle.

As you work through your feelings, acknowledge that you’re hurt, but get rid of all  bitterness, which is a poison to the mind and body, and a robber of victories. When you give yourself the “luxury” of rehearsing what was said or done over and over—and then becoming hurt and angry again and again—you’re setting yourself up for failure.

Instead, obey God. Get rid of all bitterness by forgiving your betrayer. When you do, you go free. Bitterness is the root of most diseases and mental health issues. It is a thief. But love is a great protector in our lives.

Staying mad will never bring justice. God is your avenger. He is a God of justice. You may not see it when or how you like, but recompense will come.

Learn the importance of being quick to forgive as Jeremy Pearsons teaches you from the Word.

Before you sigh, with exasperation, hear us out.

How do you love a betrayer?

You forgive them. You pray for them. You refuse to seek revenge. You even look for an opportunity to do good to them. Just as important, but no less challenging, you don’t talk poorly about them.

Sound like a tall order? It is. But God would never ask you to do something if it weren’t for your own blessing and victory.

(Get more tips about handling your enemies biblically HERE)

Many betrayals come in the form of rejection. Rejection in the workplace, rejection by a spouse, rejection of value through a violation of trust by someone close to you.

A spirit of rejection is of the devil, plain and simple. And it doesn’t belong to you. So when you are working to respond to a betrayal God’s way, you have to come to a place where you don’t let it define you.

You are God’s workmanship. You are His child. You are precious in His sight, and He has great plans for you. No poor decision by another can change that—but you have to fight the temptation to let it do so.

At the same time, as much as you may not want to, a betrayal is a good time to look within too. Even if the other party was 98% in the wrong, was there anything you could have done differently in this situation? Perhaps, you neglected to heed a warning from the Lord. Or you made some decisions that put you in a place of vulnerability to attack. Taking personal responsibility for your part in something—no matter how small—is a HUGE step toward healing and victory.

Even if there were areas where you missed the mark, the betrayal doesn’t define you, so don’t wear what happened like a garment. You are who God says you are, and your value is found in Him alone—not in what others have said and done to you.

Responding to a betrayal is a process, and the most important part of that process is deciding to let God heal you. Healing comes from God alone, not the other party’s apology, not a change in circumstances—neither of which may ever come.

Do you really have to let God heal you? Won’t He do it automatically?

Some people don’t want to heal. They feel that it is their right to hold onto hurt and hold a grudge against the offending party. What they don’t realize is how much they are hurting themselves and those around them. It will affect your health, your relationships and will hold back your victories in every area of your life.

Forgive and go free. Let God heal you. Invite Him to come into the tender places of your heart and make them new. He can make your heart and soul as if the betrayal never even happened. In fact, He can take your situation and use it to make you better than ever!

We hope these five ways to respond to a betrayal have been helpful to you. We pray you would never have to experience a betrayal, but we also want you to be equipped to come out on the other side of any circumstance victorious, as God intended. No matter what it feels like right now, know this—you CAN come out on the other side of this stronger, happier and more victorious than you ever imagined. Have faith in God!

Watch Kenneth and Gloria teach you why it is so important to refuse offense to be healed.